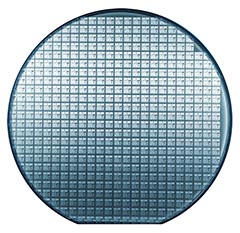 At the start point stands the silicon wafer. A silicon wafer is a disc of silicon. The disc is created through a now very common process. First, a bar of silicon is built and is sliced to create each disc. Once the disc of raw silicon is created, it can be worked on to make any type of electronics. The process consists in diffusing some atoms of impurities in the raw silicon. Those atoms integrates inside the silicon structure and modifies the electrical properties of the silicon. This is the base of any modern electronic. Computer's microprocessors, microcontrollers, ASICs are all using the same technology.

Compared to microprocessors, pressure sensors are very simple to create. Four resistors are diffused in the semiconductor to create a Wheatstone bridge.

Years ago, silicon diaphragms were created by drilling in the wafer with tiny diamond-drills. Even though some of today's manufacturers are still using this technology, it has been proven that drilling in the silicon creates some constraints leading to some micro-cracks in the silicon diaphragm and silicon chip in general. Those micro-cracks lead to a less accurate and less reliable sensor. Additionally, this old method is not very cost-effective since each diaphragm has to be drilled individually.

Today's technology to create the silicon diaphragm is often referred to as the MEMS (Micro-Electro-Mechanical Systems) technology. MEMS technology is basically a way to create 3D shapes in a silicon structure, based on chemical solutions (etching process) and other improved technologies. 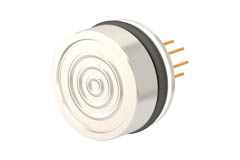 For these reasons, the silicon die is mounted on what is called a header. The header also sometimes called the feedthrough, will give the user a universally-used, easy-to-use electrical connection but will also serve to create the containment, as the header is tightly sealed to the housing.

The experience acquired by Senzors in this field through the years gives us a certain leading edge over our competitors. 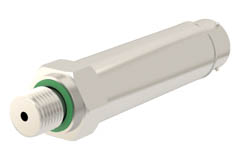 We use cookies and similar technologies for a number of reasons, such as to improve your browsing experience, making our site reliable and secure, personalizing content and to analyze how our site is used. We DO NOT use cookies to provide you advertising. We DO NOT use any third party company to analyze our data and thus we DO NOT share cookies with any other company. By visiting the site, you accept our terms & conditions, legal notices and our privacy policy.